Responsibility for the personnel

We are constantly building on our competence, our work will include more development tasks and efforts will be made to automate routine work. Work will require self-development and a focus on the customer approach.

In 2019, Keva’s Board of Directors set so-called frameworks for full-time equivalent years for the following three years. Under the frameworks, the number of Keva employees will decline through natural attrition. We predict that automation will reduce the amount of routine work and jobs. At the same time, support will be given to relocating Keva people within the organisation to new tasks that require new skillsets 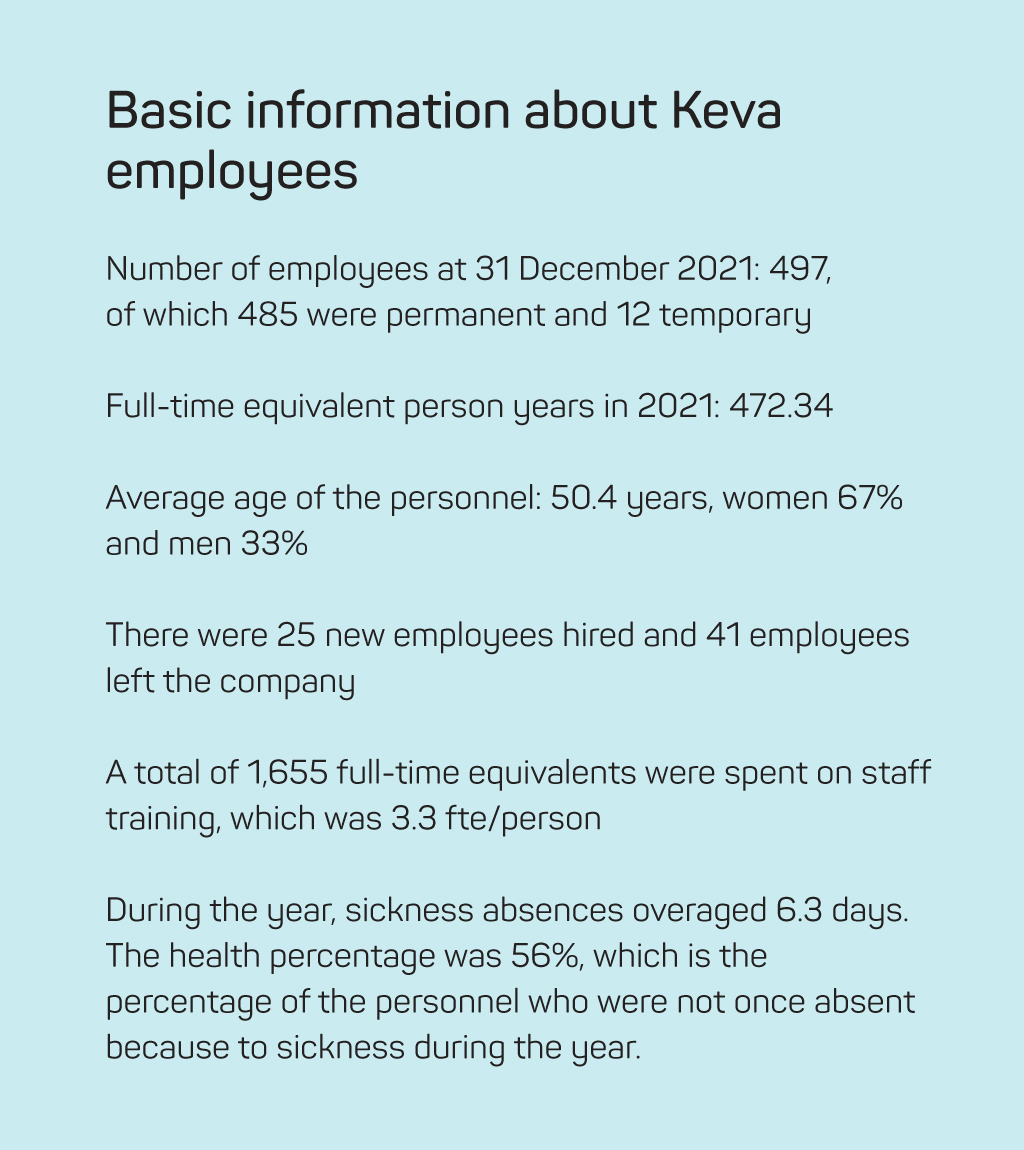 Fair and equal treatment of the personnel

Each and every Keva employee, irrespective of their role and position, is entitled to good, respectful and dignified treatment from their supervisors, subordinates and colleagues. This and other general principles are enshrined in Keva Code of Conduct

We regularly monitor the implementation of equality and non-discrimination in employee surveys and equality reports.

Aiming for a fair reward system

Keva employees have salaries based on collective agreements and in 2019 we completed job descriptions, job demand evaluation and the interrelation of levels based on the HAY Group’s (now Korn Ferry) scoring method.

Keva can give a bonus for particularly good performance and in 2021, 147 Keva employees (2020: 58) received a non-recurring bonus.

Bonus payments are based on reaching targets set by the Board of Directors. In 2018, Keva carried out a bonus reform aimed at making performance assessment and associated remuneration more consistent and transparent.

Keva promotes the equal treatment of different ages and looking ahead will pay more attention also to other factors including different nationalities, languages, religions, beliefs, opinions, disabilities and sexual orientation to promote diversity. Equality and non-discrimination are also important in recruiting processes among other things.

Almost 70% of Keva’s employees are women and in 2021 there were 29 women and 29 men in supervisory positions. At year-end 2021, there were two women, including an employee representative, and seven men in the Management Group.

The average and median pay of women is well below men’s salaries. Most of the pay gap between women’s and men’s pay can be explained by the fact that there are a lot of women at the lowest job demand levels. 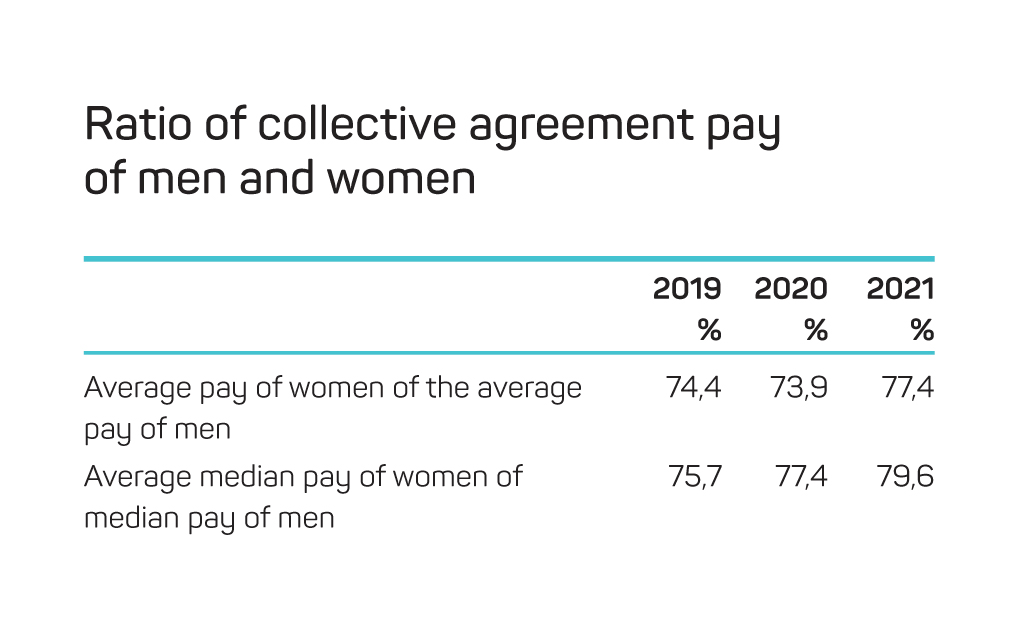 Sickness absences fell during the year of corona

Strategy work and development of the corporate culture

In 2019, Keva rolled out a strategy to 2025. As the project of merging pension systems was abandoned in autumn 2021, this also resulted in a new situation for the staff.

The Board of Directors of Keva approved the updated strategy in June 2022.

Keva ensured the wellbeing of its personnel during the pandemic

Once the corona pandemic had spread to Finland, Keva largely switched over to working from home from 17 March 2020. In the exceptional circumstances, a raft of measures was taken to support the work ability of the personnel and to ensure the continuity of operations. These measures included:
• An update of deputy staffing arrangements
• A clarification of annual leave guidance
• A round of calls by supervisors to chart employee wellbeing
• A physiotherapist intensified ergonomics guidance for working from home
• An assessment of risks together with occupational healthcare
• An expansion of occupational healthcare services, inc. Covid-19 testing
• A lecture by an occupational health psychologist
• Instructed exercise classes online by the staff council
• Improved personnel communications.

Hybrid work is and will be a part of the daily life at Keva, and it is developed through ongoing experimentation.